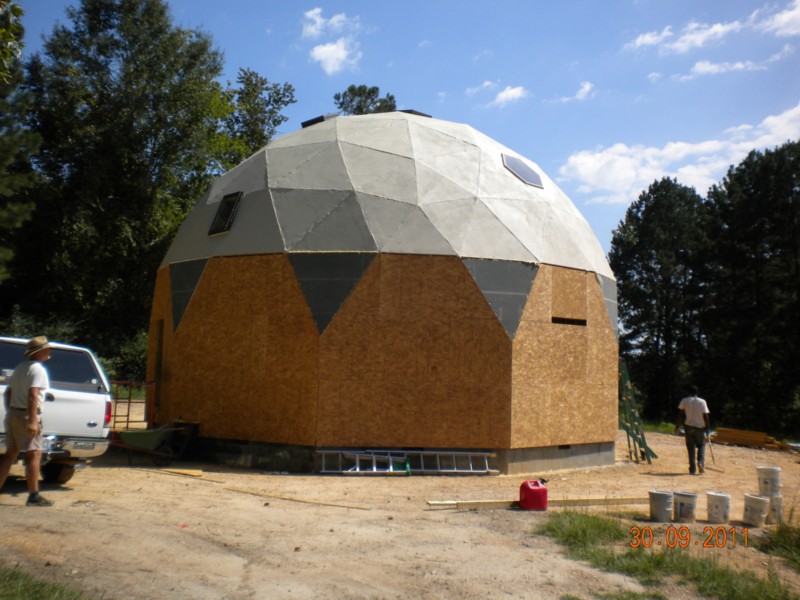 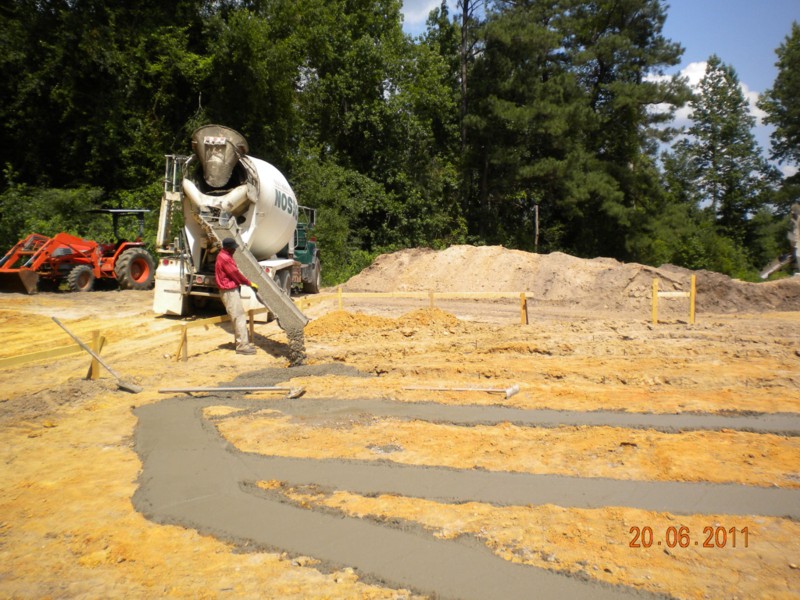 Photo taken as concrete footing was being poured & leveled. 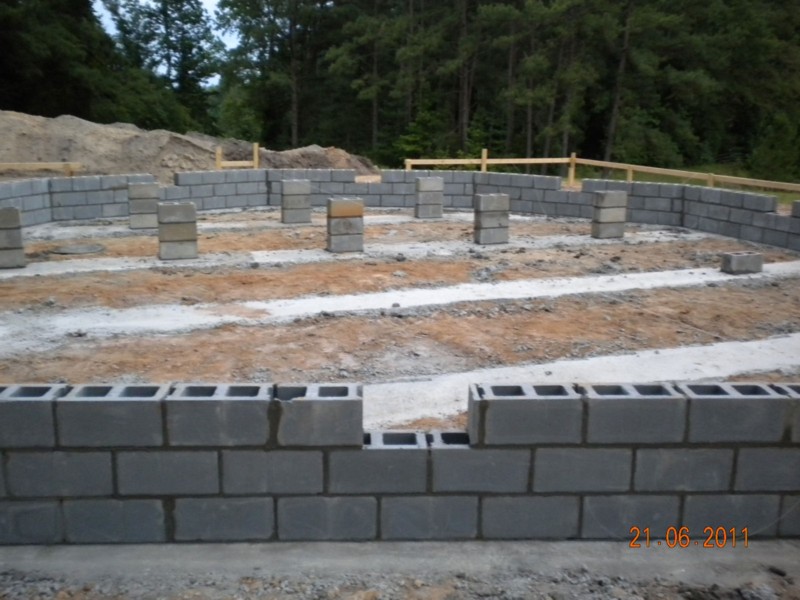 The space in the concrete block stemwall is for a foundation vent. 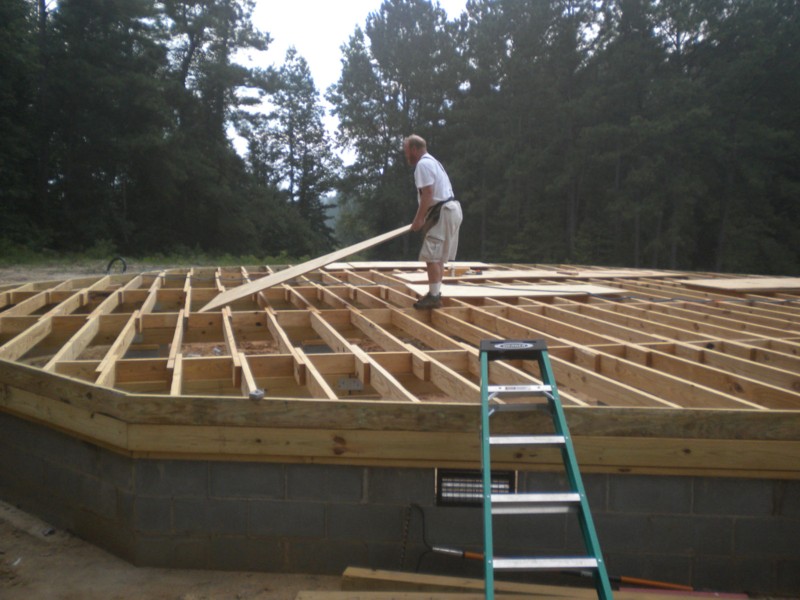 The floor is framed with 2x6's over the perimeter stemwall and some beams. 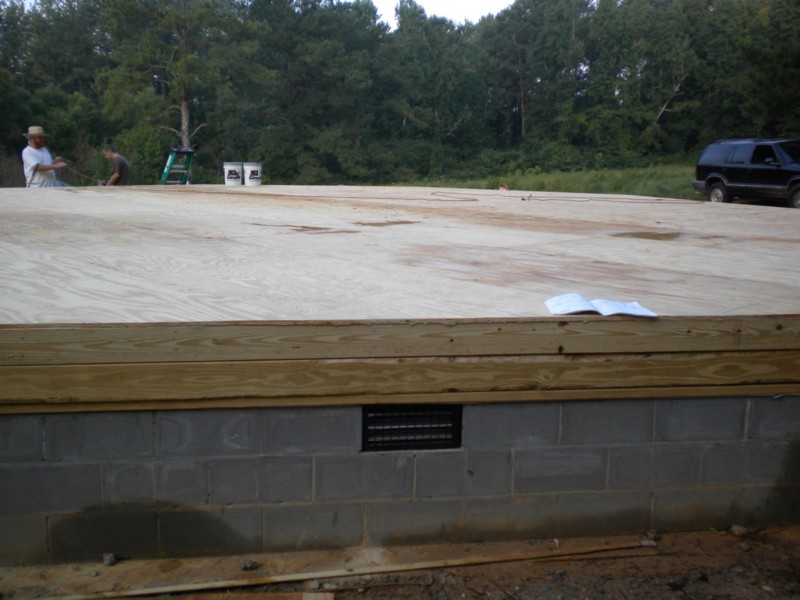 Tongue and grooved 3/4 inch thick subflooring is glued and screwed over the floor framing. 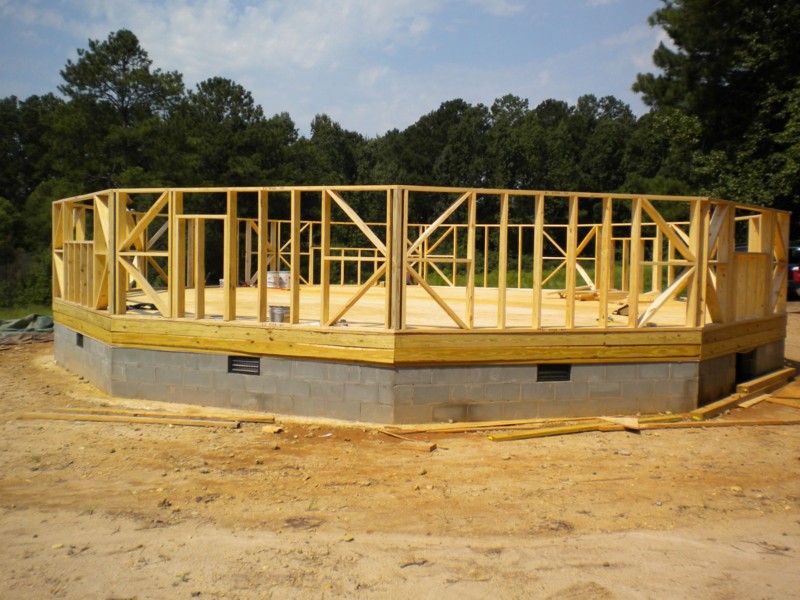 The pre-assembled and internally braced perimeter riser walls are assembled
flush with the outside of the floor. 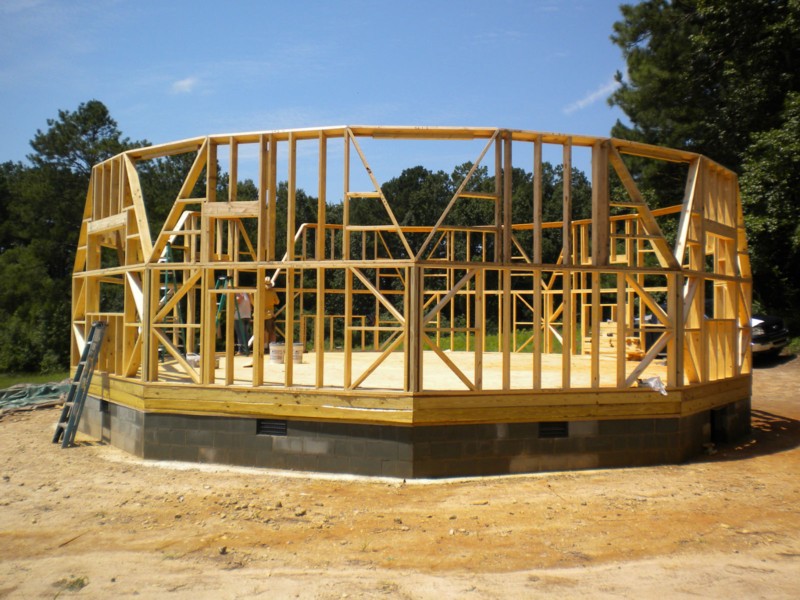 Next the pre-assembled trapezoids are assembled above the perimeter riser walls.
All conventional door and window framing is already within the factory built riser walls and trapezoids. 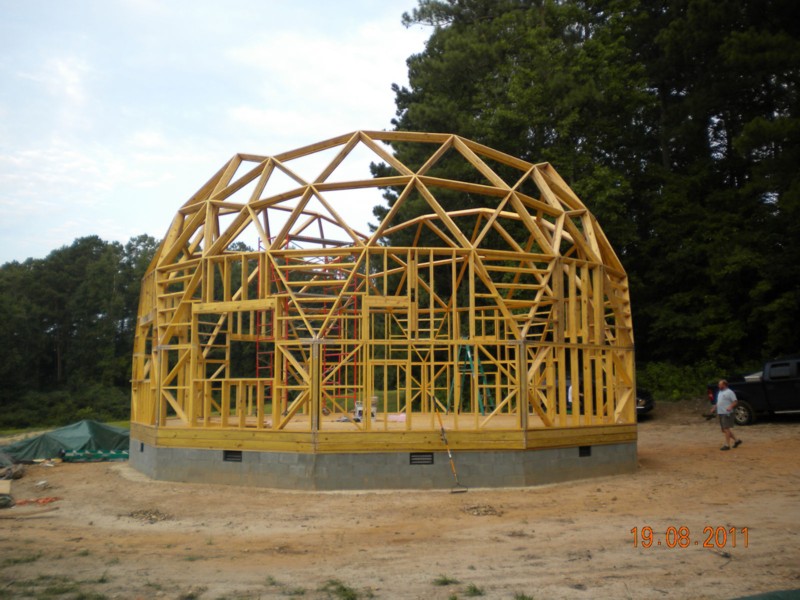 The upper part of the dome is framed by connecting the struts
one strut at a time per the assembly diagram with the screws pre-loaded in the strut ends.
Three inch long screws are inserted in pre-drilled holes in the struts using a rechargeable drill
with a T-25 star drive tip/bit that fits the stainless steel screws.
Screws and tips/bits are supplied with all EconOdome frame kits. 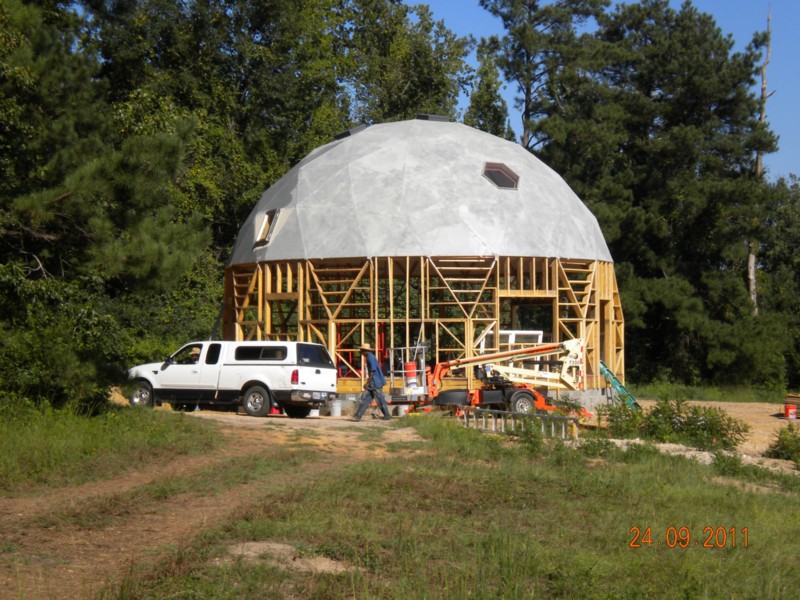 Next, the triangle panels are installed and sealed one level at a time.
Doing this makes the work easier and also completes the interior on the second floor as well as the exterior.
The triangle panels include insulation plus interior and exterior finishing materials.

Now the lower part of the building can be covered and sealed.
This dome was sealed using Polyforce spun woven polyester seam tape
embedded in elastomeric sealing paint over Densdeck roof sheathing.
Densdeck is a fire safe exterior roof board that is often used on commercial roof surfaces.
Densdeck is made of gypsum infused with silicone as a stabilizer and binder.
This sealing method is called, "the saturated seal"
as the spun woven polyester seam tape is saturated with the elastomeric seam tape.
One good "paint-on" waterproofing product, available in white only, is called Tropi-Cool.
Tropicool is 100% silicone and is available at Home Depot.
You may wish to consider this waterproofing method if you are interested in a more fire safe home.
There are other methods that can be used to waterproof the dome roof.
The exterior panels can be ordered with TPO (thermoplastic) shingles already
bonded to the exterior panels at the factory. 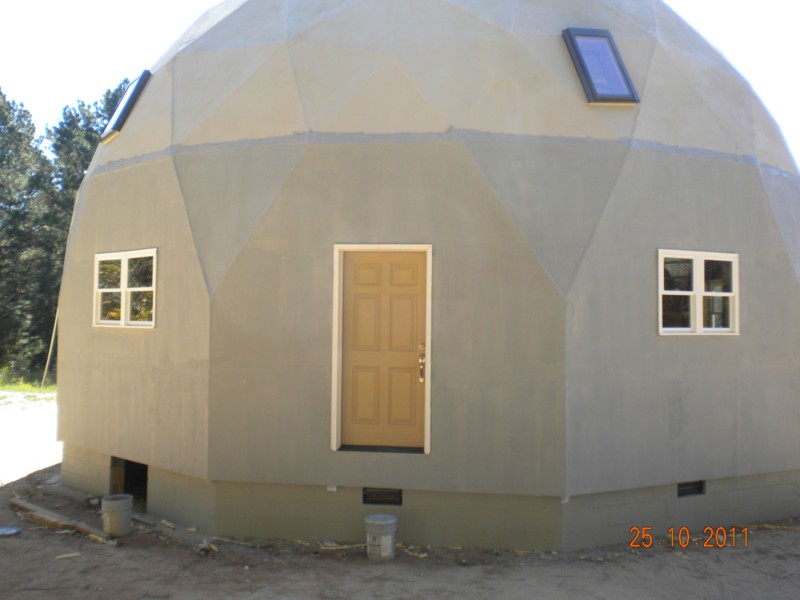 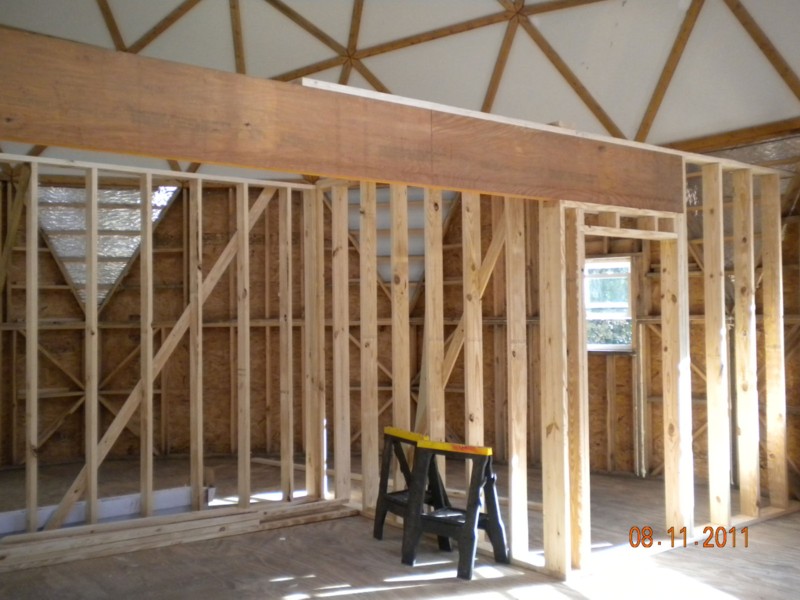 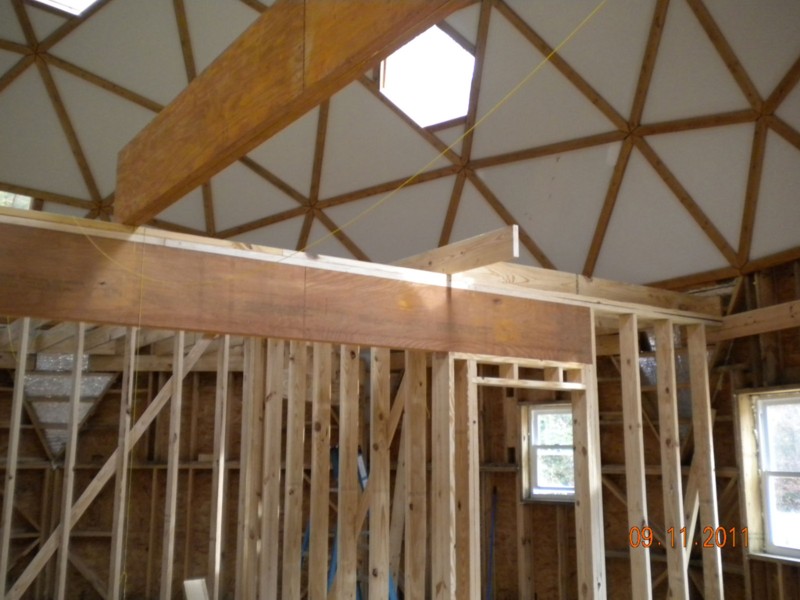 Faze Change Produx now offers a Loft Ledge T-Beam frame kit that eliminates the need
for installing a Ledger to support Loft Level floor joists at the inside perimeter of the building.
This innovative feature supports the Loft floor with a "Ledge" instead of a "Ledger".
All plan sets include a Loft Level framing plan that show the positions of all floor joists drawn to scale. 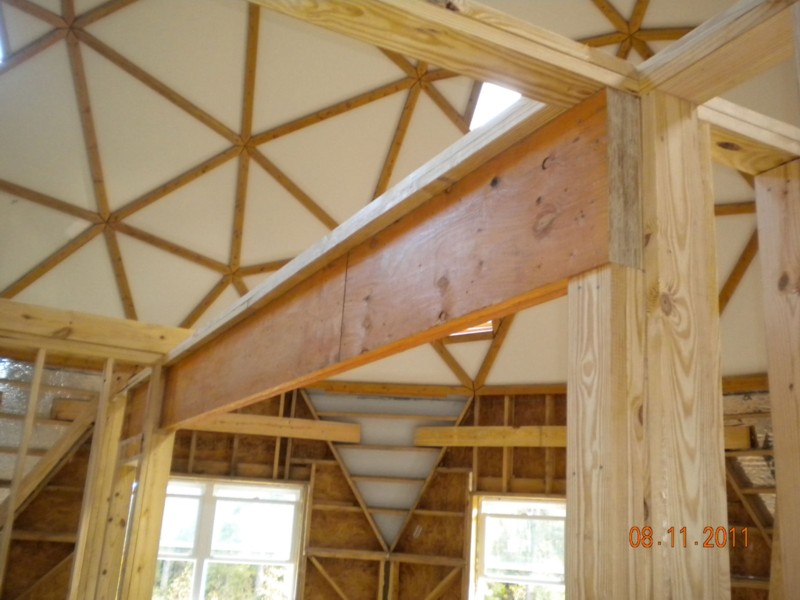 You can see the inside perimeter 2x8 ledger in the back of this photo. 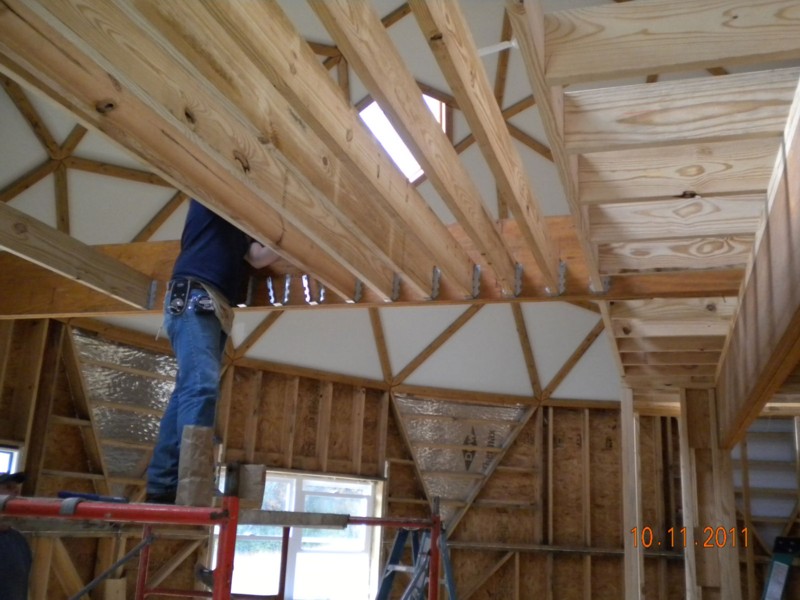 The floor joists for the second level floor frame are put in place per plans. 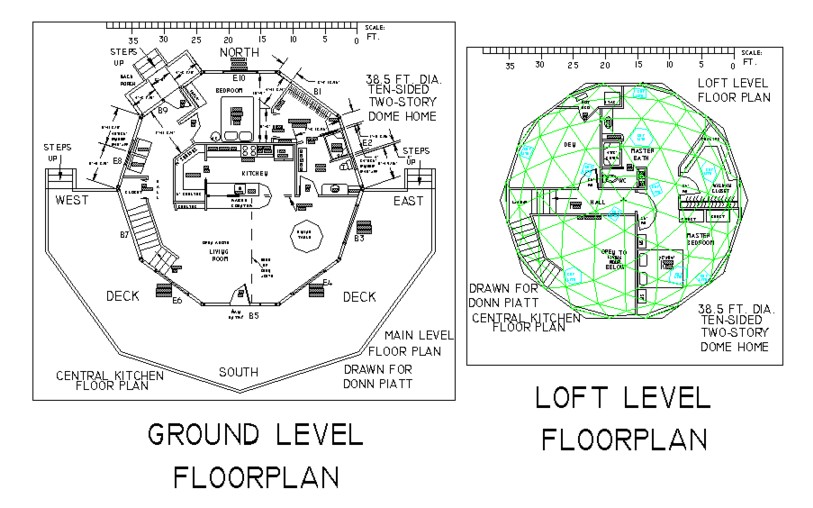