The Arctic Circle is the southernmost latitude in the Northern Hemisphere at which the sun can remain continuously below or above the horizon for 24 hours. These conditions exist at the winter solstice and at the summer solstice.  Barrow, Alaska, located 330 miles north of the Arctic Circle, is the northernmost settlement in the United States. In winter, the community endures 65 days of darkness, while during summer it enjoys 82 days of perpetual sunlight. Of the community’s 4,500-plus residents, more than 60 percent are of native Inupiat descent. Barrow was originally a whaling community, and tours of Barrow often combine cultural and educational activities with wildlife viewing and tundra exploration. 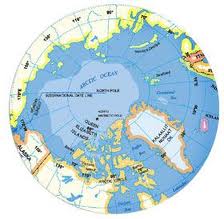 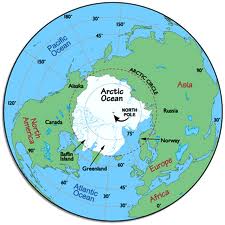 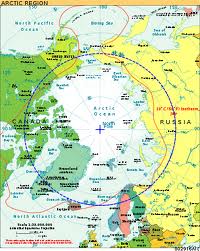 Near Barrow the treeless frozen tundra will thaw to a depth of about 3 feet in the summer. Homes are held in place with vertical pilings that extend 12 feet or more down into the permanently frozen tundra (permafrost).  To secure the pilings, a slurry of sand and water is poured around the pilings. Within a day, house-supporting pilings are permanently frozen into the tundra. Not having to use concrete saves some money. However, getting any building materials to Barrow, Alaska is complicated and expensive.

There are no roads into or out of Barrow. There are about 40 miles of mostly gravel roads connecting the homes and businesses within the village of Barrow. Both the tundra and the remoteness of Barrow conspire to make flying or a "once a year when the sea ice melts" barge the only options for getting building materials to Barrow, Alaska. During the spring of 2012 EconOdome Kits and other pre-cut and uncut materials were loaded into two standard 20 ft. shipping containers in Sullivan, Illinois and sent to Barrow, Alaska via truck, train, and the annual Bowhead Barge. 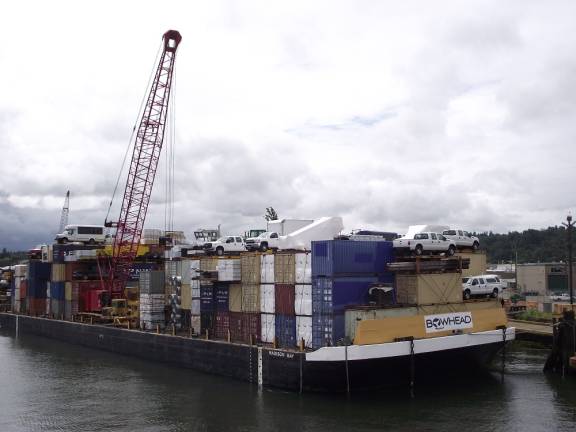 My name is Wil Fidroeff. I have helped to design and build many unique homes. Most of those homes have been dome homes. During the winter and spring of 2012 I became deeply involved with designing, manufacturing, and shipping construction materials to build a 30' diameter, two story, dome home suitable for Barrow, Alaska. I soon learned that helping to build a dome home specifically designed for the Arctic climate and for the people who live in Barrow would require much consideration and also close communication with folks whose regular business is building homes in Barrow and in other villages adjacent the Arctic Ocean. 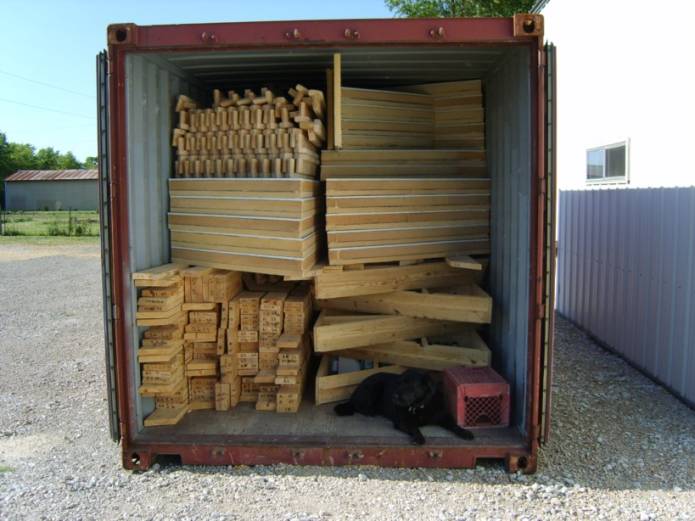 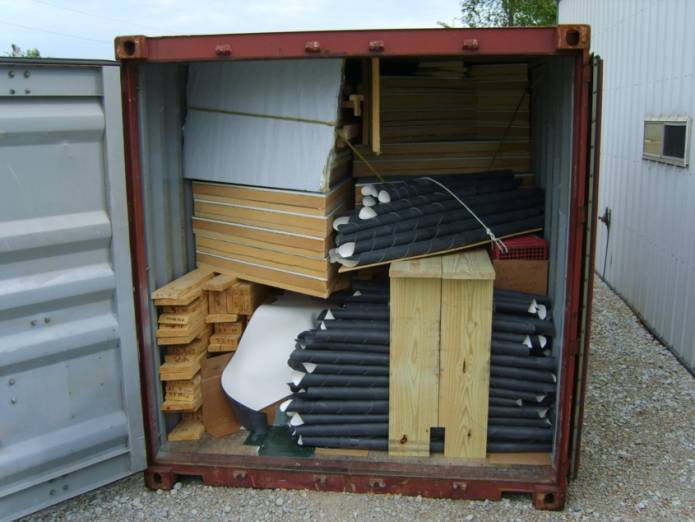 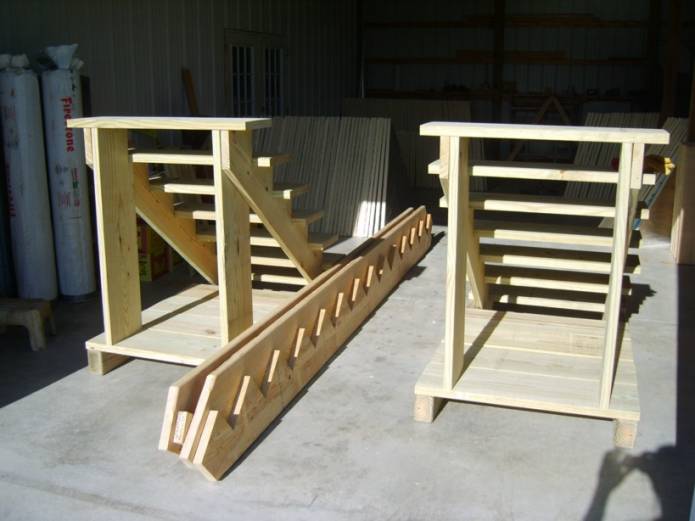 The exterior steps are on 4x6 treated skids so they can rest directly on the ground.

The interior stairs were made as shown so that the treads and risers are easily attached. 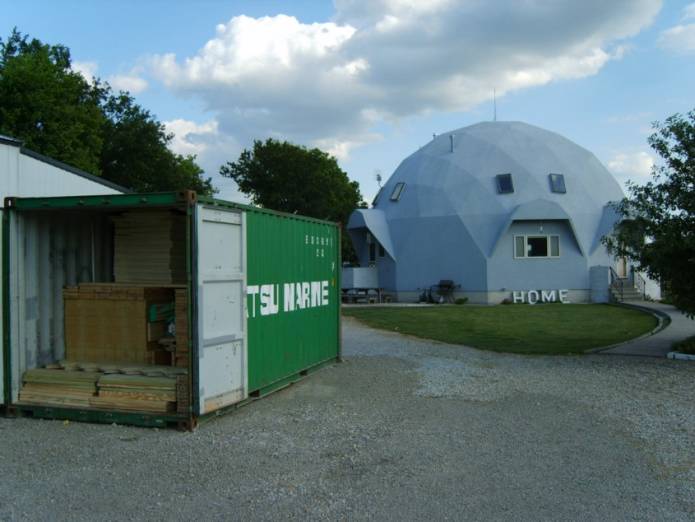 A second shipping container was also filled with construction materials for Barrow, Alaska.

enough 2x10's to frame both floors and the Arctic entry roofs, 2x4's for interior wall framing,

In the background you can see the home/office of Wil Fidroeff and Carol Horsman,

Many new homes in Barrow, built for the native Inupiat Eskimos and others, are built under the guidance of TNHA. I have found TNHA to be very diligent in wanting to build better and more economical housing for the people of Barrow and other villages adjacent the Arctic Ocean. Sometimes the homes are sold on the open market and other times the homes are rented to native Inupiats. BTW..It has been determined using carbon dating technology that the native Inupiat Eskimos have continuously lived adjacent the Arctic Ocean in northern Alaska for more than 1,600 years. 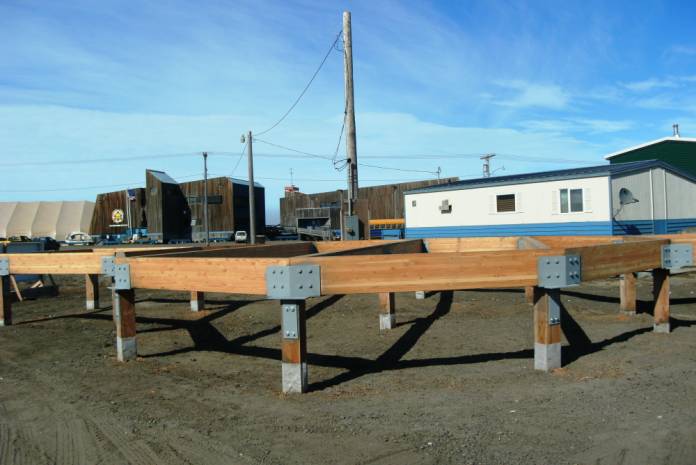 North Slope Borough Search & Rescue, and (from left to right in the background)

at the intersection of Okpik Street and Ahkovak Street

Mr. Ognik's flat roof may fall in and his flat walls may be moved by the Arctic wind.

The average winter temperature is around -25 degrees F.. So homes need an Arctic entry to minimize the heat loss when entering or leaving the building. Building codes require two entries, so two Arctic entries became part of the design. In very cold Arctic climates, pre-heated fresh air is needed to replace air exhaused from the bathroom and kitchen. So, in the Barrow dome home, fresh air is drawn in thru a duct located just under the subflooring of the insulated main floor so that the fresh air is warmed prior to entering the interior. Turning on an exhaust fan draws in passively heated fresh air thru about 60 feet of ducting under the floor. Additionally, the air within the dome home is destratified by moving air from near the top of the dome ceiling to near the floor at the lower level. This is done using a low wattage & quiet fan located inside a duct space.

Unfrozen fresh water will initially be delivered to the home via a water truck. Eventually, new homes built in the village of Barrow, are connected to a utilidor. Utilidors (think utility-corridor) are made with laminated planks that are insulated. Sometimes the utilidor is above ground, sometimes below ground. Water storage tanks are installed in all new homes as it will sometimes take a year or more until a new home is connected with a utilidor extension to the existing utilidor system.  The heated utilidors are used to keep water and sewage from freezing.

The first draft of the ground level floor plan looked like this with three bedrooms and a bathroom upstairs.

After the building was enclosed, and the ambiance of the loft level under the dome ceiling was felt,

the floor plan layout was revised (see below) in order to locate the kitchen and living room on the second floor,

under the geodesic dome ceiling accented

After the walls at the ground level were constructed mostly with pre-cut lumber,

the second story floor was constructed with 2x10 floor joists and Advantech subflooring. 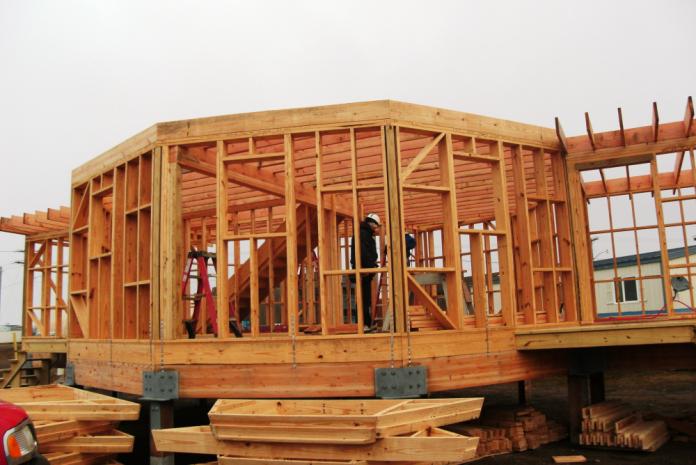 In the photo above you can see the pre-assembled vertical trapezoids and EconOdome struts.

Headers are not needed on the perimeter walls as the loft level rim joists are located above the doors and windows.

Exterior walls include diagonal bracing to ensure stability. With all framed perimeter walls including bracing, insulation sheeting could be installed over the braced framing. The sloping triangular surfaces of the dome frame(see below) are sealed with lapping 90 mil (cold weather tested) EPDM rubber triangles that were attached with glue. Similar coverings made with 60 mil TPO may be attached with large washers with the lapping seams covering the fasteners and fused together with a heat gun. Triangular TPO rubber shingles may be heat welded in very cold weather. 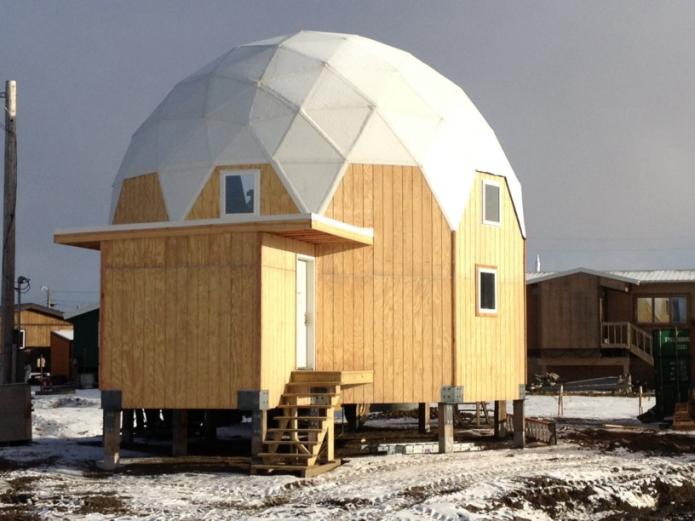 Many of the grasses, flowers, and berries of the Arctic tundra owe their existence to the presence of permafrost. With only a few inches of precipitation a year, Arctic Alaska could well be a barren desert. However, permafrost forms a frozen floor beneath seasonally thawed ground near the surface. Rainfall and snowmelt cannot percolate or drain off. Instead, water collects at the surface, providing moisture to nourish plants and forming innumerable shallow lakes and ponds. Tundra plants, in turn, insulate the permafrost beneath them from thawing. They seal out the warm temperatures and sunlight of summer so the permafrost remains frozen. Melting of permafrost can pose problems for humans and their activities. If overlying vegetation is removed or disturbed, its insulating qualities are lost and the permafrost begins to melt. Waterlogged ground becomes soft and collapses. Buildings and roads may slump or tilt, and vehicles bog down in mud. Alaskans have developed innovative techniques for building on permafrost so it will not melt. Houses in permafrost areas are frequently built on pilings so they will not transfer heat to the ground. Floors are insulated. Water and sewer pipes are sometimes installed above ground.

Recent study results show that much of the undisturbed discontinuous permafrost south of the Yukon River has warmed significantly and some of it is thawing. This raises the possibility that roads, buildings, and other structures on thawed areas will collapse. Another problem could arise as well: As permafrost thaws it can release methane and carbon dioxide, gases that contribute to the greenhouse effect and accelerate global warming. Near Barrow, and along the north coast of Alaska, adjacent the Arctic Ocean, the permafrost extends as deep as 2,000 feet below the surface.

The 30 ft. dia. dome built in Barrow, Alaska during the summer of 2012 was built upon pilings extending 12 ft. below the surface. To assist with vertical loading, bolts protruding sideways into the frozen tundra were installed near the bottom of all the pilings. Pipes were mounted on the sides of the pilings so that the temperature of the tundra could be measured at chosen depths. The pilings and support beams were joined with heavy duty welded and bolted steel connecters. However, if global warming causes the permafrost to melt to greater depths each year, new types of foundation systems, that are either adjustable or floating will need to be devised for the Arctic.

One such foundation involves resting a modified EconOdome frame kit on 20 "feet"/pads. 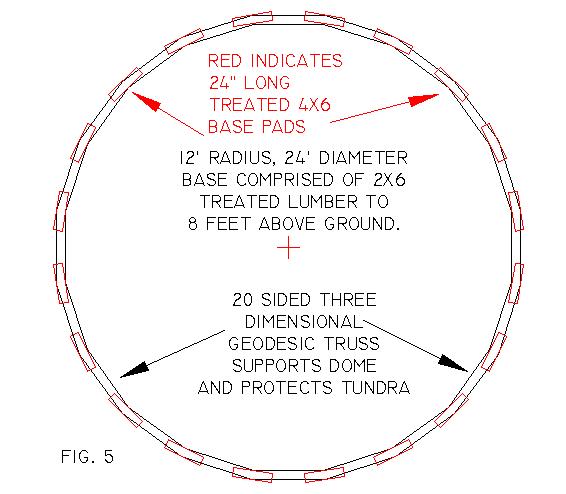 A balanced and lightweight intact dome will rest directly on the tundra, much like the feet of a lunar lander would rest on the Moon or Mars. The difference is that this type of foundation system is much more economical. The up-side-down vertical 2x6 trapezoids support the entire vertical load of the dome home above. Adjacent the ground, the 2x6 supporting circular truss is held in tension via stainless steel screws and metal straps. Each foot on the building will rest on a small pile of gravel. If a locomotive pulling numerous and very heavy train cars can be supported by gravel under ties and tracks, certainly a lightweight and balanced intact dome home can be supported by a circular truss resting on twenty pads. If after several freeze-thaw cycles, the building leans, the building can be easily jacked up and shimmed in place using treated wood blocks under the pads. There are 10 places at the perimeter where jacks can be positioned, if that ever becomes necessary.

For more info on EconOdome Kits

Designed for all climates and lifestyles....see...